Male intimate partner violence leads women into a cycle. Periods of tension, abuse, justification and reconciliation follow one another. Each time the cycle repeats itself, the violence gets worse. 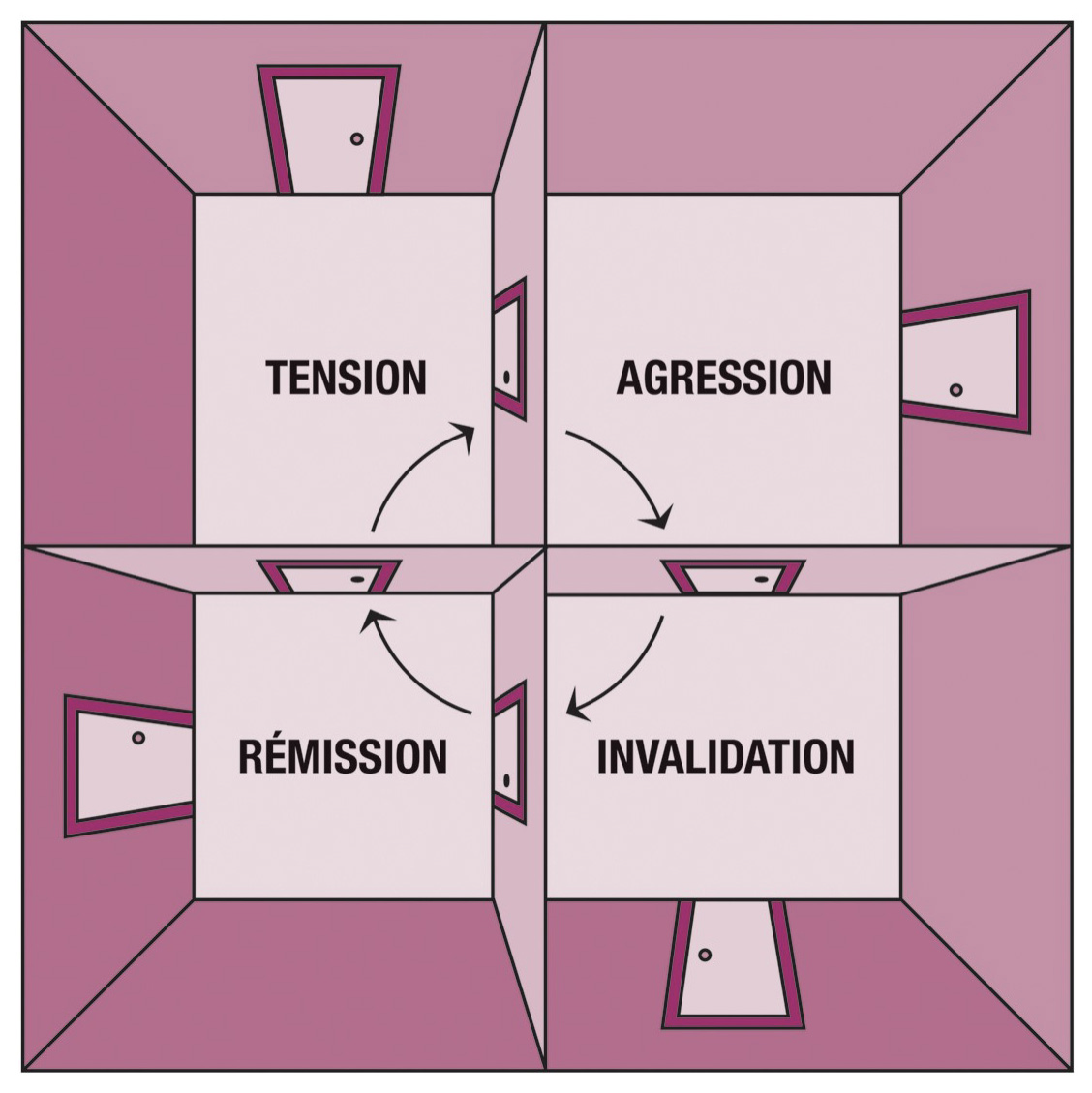 The visual concept of walls to illustrate male intimate partner violence was developed by the Alliance gaspésienne des maisons d’aide et d’hébergement to update the cycle image used in the past for this purpose. The decision to illustrate male intimate partner violence with walls was inspired by the expression “being caught between four walls”, which very often represents the state in which an abused woman finds herself. By definition, a cycle is immutable and always repeats itself. However, the walls all have doors to which women have the key they need to exit the “cycle”.

Origin of the expression

In Québec in the 1970s, thanks in part to feminist struggles, violence by husbands against their wives was highly denounced, forcing the political, legal, social and medical systems to recognise it. At the time, when conjugal violence became less private and increasingly a public issue, most couples typically were married.

Since the literal meaning of the term “conjugal” refers exclusively to the matrimonial bond that unites two people, the choice to qualify this form of violence as “conjugal” was entirely justified. Today, even though the reality is quite different, now that most couples have common-law relationships or live apart, the term “conjugal” is still widely used.

The use of the term “conjugal violence” poses a problem in terms of precision, namely regarding the person, man or woman, who inflicts or is subjected to this violence. This ambiguity is an issue in itself: it obscures the official statistics which clearly show that it is mainly women who suffer violence. What is more, violence is very often perpetrated after separation, when the marital bond is broken.

For the sake of precision, the Gaspesian Alliance of shelters has tried to update the term “conjugal” and to find a replacement for it. Despite consulting an expert and conducting etymological research, it quickly became apparent that building and promoting a new name would require a considerable investment of energy. This being said, there are still too many important struggles in the area of domestic violence that need to be prioritised. For the sake of precision and fairness, we propose to the adjective “male” to the usual term. Retaining the use of the term “conjugal” ensures the continued use of a common language, while the addition of “male” provides a more accurate formulation.

If you are wondering about your own relationship, if you want to talk about it, contact the L’Émergence team to discuss it in complete confidentiality.